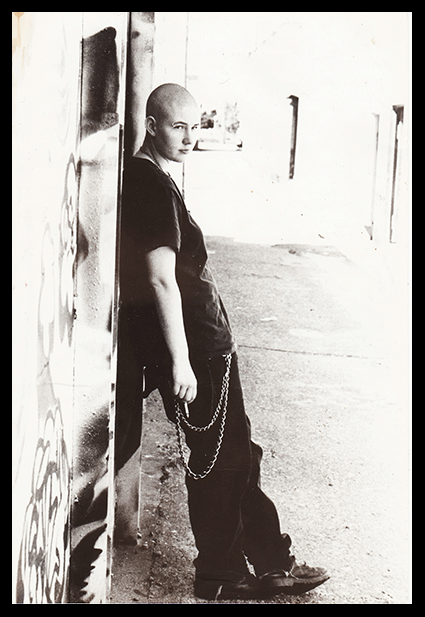 I have always loved chain. I was a ‘free-range’ child, and for ten years, we lived across from a half wooded, overgrown lot, where people dumped their shit. Sometimes, there were bits of chain. I collected them.

For years, I wore a wallet chain. Not that ridiculous paper clip chain that comes on the wallet that you buy at Hot Topic. I had higher standards, in both wallets, and chain. I saved my money, and I bought a good, leather wallet. I went to Home Depot and bought the hardware that I needed. My wallet chain was big. It was heavy. It made a lot of noise.

The only college to which I applied was the cheapest school in the state. I didn’t understand financial aid at the time, so I didn’t apply beyond that, but I got a work-study job in the library, and I worked there for four years. My third year, when I finally started socializing, I learned that for the past two years, the queers on campus had called me The Girl Who Doesn’t Talk. Because I worked in the library, everybody knew of me, and everybody knew the sound of my chain. But nobody actually knew me.

Talking is hard. I was taught to not do it. I see my parents’ words online all the time: “If you don’t have anything nice to say, don’t say anything at all.” I suspect that is crappy advice for everyone, but it was particularly crappy for a bullied, queer kid, who, let’s be real, was kinda weird in general. In the sixth grade, my mother was called in for a conference because I ‘asked too many questions’. I didn’t ask another question in class for four years. I was repeatedly told to STFU.

On my birthday, the year that I started talking, I went on a date with a girl, an artist, who had been stalking me at the library. She told me that she was a fascist (but not a white supremacist – she just wanted to rule the world as a social justice warrior with an iron fist). I told her that I don’t understand people’s feelings, most of the time. I told her that I don’t understand people. It rained a lot, and it soaked through my shirt. She liked that I didn’t care. I didn’t tell her that it was my birthday. She gave me a charcoal drawing, and said that my roommate had told her about my birthday, and that it was a birthday present. It was five years before she finally told me what the abstract, charcoal drawing represented; It was the sound of my chain.

That girl will always have a place in my heart. I will forever love her, because, among other things, she listened to the sound of my chain. I now have chains tattooed around both of my forearms. A guy named Clay did them. I’ve had a lot of tattoo artists, but Clay is still my favorite. He also did my crown of thorns, and his work is beautiful. In 1997, he moved to South America to wander around. I don’t know what he was seeking, but I hope that he found it.

Now, when people ask me about the chains on my arms, I say that they represent the prison of the gendered body. But that is now, and tattoos are
memories, journals, a personal history. Now has very little to do with tattoos.

I saw Clay on a grey, Seattle afternoon. I gave him my wallet chain, the chain that made noise, the chain that spoke for me, that kept me from being invisible. He put that chain on the photocopier, and he made a copy. Then he put that image on my arms.

I love everything about chain. I love its weight. I love the cold, rational feeling of its links. I love how it holds women in place, so that they can’t hurt me. I love how it warms to the body.

But none of that is why I asked Clay to tattoo my chain on me. At the end of the day, (and I know that it’s hard to believe), I am always, and always will be the Girl Who Doesn’t Talk. But even as the Girl Who Doesn’t Talk, everyone knows me, and they notice when I enter a room. It is important to make noise. I’ve gotten a lot better at it. But even when I couldn’t talk, I have always had the sound of my chain.