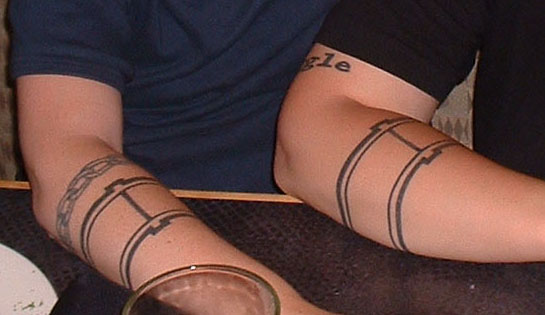 She looked like an exotic bird that summer, with her pink and blond mohawk, blowing about in wisps. I told her so, and she understood that it was a compliment. It’s always a compliment to remind me of something wild.

She was wild, in a way. Our relationship was sharp, and sometimes bloody. I catered to her feelings. They fascinated me, extreme and abrupt, consistent only in their constant flux. Most of all, they seemed so real, at least to her. My realities are tenuous, and imbued with fantasy. I’ve never much appreciated them, so I appropriated hers.

She’d always worn the ring. We joked that it was a collar for her hand. It was metal, wide, and heavy. She’d made it years before, in a metalworking course.

To get to the village, we spent a night on the deck of a ferry, too cold to sleep, followed by three hours standing on a crowded bus. Nobody was there during the shoulder season. Rooms were cheap, and the Italian tourists that would overtake the village in the summer, hadn’t yet arrived.

In the mornings, I drank coffee on the terrace and watched the birds. In the corner, tucked among roof, beam, and sky, a pair of starlings built a mud nest. Each morning, the cleaning woman stuffed a rolled up maxi pad into the nest entrance, preventing the adult birds from feeding their young.

The starlings swooped and screamed, and other starlings rushed to their aid, a great shadow of birds, crying their outrage. Each morning, as soon as the cleaning woman finished with the rooms, and left the terrace, I removed the blockage and reunited the birds.

We divided our days between the sea and the sand. She said she was a fish, and I agreed, although I liked her better as a bird. The sun burned me and I didn’t care. She bought olive oil and rubbed it on my skin. It helped. At night, we sat beside the sea, eating, and drinking wine for hours, in an empty cafe. The daily squid catch hung from a line, above our heads. We fed the stray cats from our plates, and when the owner caught us, he chided us good-naturedly. We kept doing it.

On the tenth day, I came out of the water, and she’d lost the ring. We searched the sand for it, but it was gone. She was angry with me, or perhaps with the way that her present had swallowed her past. We listened to Tom Waits in silence.

Buy me a coffee