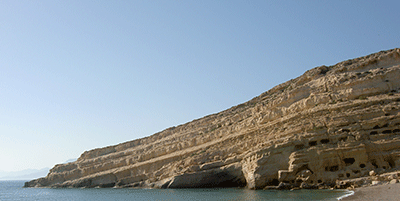 I’m terrified of heights, but I jumped off of that cliff anyway. I didn’t jump in spite of my fear; my fear is why I jumped.

My close friends understand the way in which Greece is embedded in me. A few years ago, my oldest friend, whom I have since lost, traveled there with me. Another friend of mine organizes Athens Pride, and we attended. It was their fifth Pride, and they were still getting bomb threats. Here, now, I don’t march in parades, but there, I marched, because war is war, and we are soldiers, in our own way.

We went to Crete, and made our way to a small, Southern town that was once a popular hippy resort. Now, it’s kinda dirty and fairly empty. We spent our days on the sparsely populated beach, spending five Euro each day for lawn chairs. We could have gotten bar service, but I went and fetched our beer from the shop around the corner.

Out in the water, perhaps 300 meters away, a rock cliff jutted from the sea. The West side was sloped, and the North side, perhaps 80 feet up, faced the beach.

Kids, mostly teenage boys, were swimming out, and jumping off of the rock cliff. I was mesmerized. My fear of heights has steadily increased, over the years. When I hiked the Mountain with my father, we had to cross long suspension bridges, over chasms of several hundred feet. I focused on my destination, and was able to cross them.

I don’t think that I could finish the Wonderland Trail now. One of my favorite experiences, while traveling, was always sitting on a balcony and eating a cold supper. That trip to Greece, I purposefully booked rooms with balconies, but I couldn’t go out onto them. Even one floor up, they were too high.

I swam out to the rock, and made my way up the sloping side. At the top, I backed up close against the rock wall, about six feet from the edge, and looked to the teenage boy who stood there, watching over the sea.

“Is it safe?” I remembered my father’s stories of fishing holes, and underwater rocks, and the Southern boys who hit them on their way off of the riverbank, to never walk again.

The boy looked at me, taking in my oddness, and shrugged his skinny shoulders.

“It’s free.” His accent wasn’t Greek, but I couldn’t quite place it. For better or for worse though, I’ve always been fluent in teenage boy. I knew what he was saying: “You’ve got to risk something that matters.”

I was too afraid to run and jump. I was afraid that I’d misstep, and end up slipping, instead of jumping, sliding down the cliff, dead before I hit the sea. I knew that I needed to step off of that cliff. I knew that I couldn’t think about what might happen. I knew, somehow, that the boy was waiting for my decision.

I counted. Four steps. I like numbers. Four. It’s a good number. I focused on the four. Just steps. Four. It had to happen fast, before my fear overwhelmed me. I couldn’t think too much. Four. Just count them. I counted as I stepped.

The drop was far enough that my brain had time to realize that I was dying. Then I hit the sea, and descended deeper than I’ve ever been. As the most amazing, pleasurable rush that I’ve ever experienced flooded my body, I realized that I was alive, and that I needed to choose. It would take effort to get back to the surface in time. I chose to live, and I swam.

Back at the beach, my friend was still napping in the sun. I woke her up, and too late, I understood that I’d wanted a witness. I wanted evidence that I could step off of the cliff.

I thought that I’d have less fear of heights, after that experience. Instead, I now know, viscerally, what it feels like to fall. I can’t even look up, at a building, or at a cliff, without my stomach flip-flopping. My fear of heights is more debilitating than ever.

I need to go back. I need to prove, again, that I can step off of a cliff, when it matters. I need to know that, if it were necessary, no matter my fear, I could step past it. I need a witness. I need to remind myself that in the end, there’s only that one step between the edge and the fall. Until I go back, the drop is just my word, and the memory of that young man, somewhere, who watched me jump.